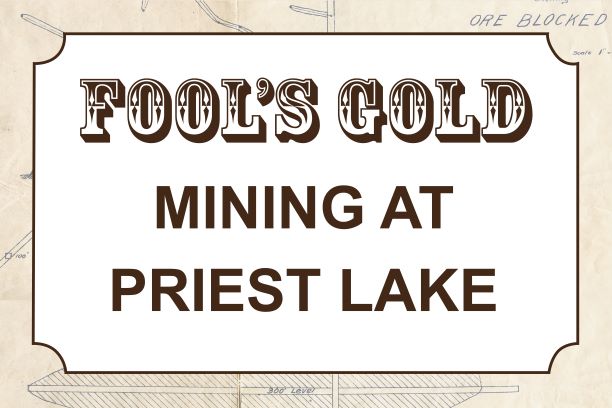 Our featured exhibit is Fool’s Gold: Mining at Priest Lake.  It traces 70 frustrating years of speculators and sourdoughs as they search for the mother lode.  Maps and photographs along with objects from the museum’s collection tell the story.

In the 1890s and early 1900s, hundreds of prospectors, some securing financing from investors, headed up lake to seek out a treasure of silver, gold, copper, lead, and zinc. Many purchased a “grubstake” of supplies at the Leonard Paul store.

The exhibit highlights the better-known mines and prospects around the lake and explains the intricacies of mining claims. Visitors can try their luck at guessing which rock specimens might be a viable ore at the lake. Along with the museum’s artifacts, the exhibit features mining objects on loan from the Wallace Mining History Museum.

Last season, the museum opened a long awaited outdoor mining exhibit. A short path takes visitors around three illustrated panels and our largest artifacts, a steam engine and ore cart. The objects along with the panels tell stories of the great potential and cruel realities of mining at the lake.

The exhibit was the idea of Lyle and Regina Manser (Regina served as president of the museum association for many years). A memorial fund for a mining exhibit was established in Lyle’s memory. Former museum president and geologist Tom Weitz organized both mining exhibits.